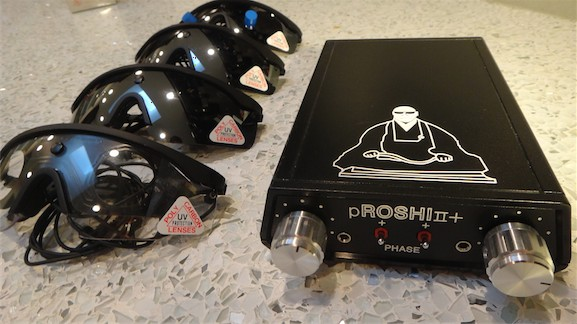 Compelling case reports support that ROSHI training speeds up recovery following stroke and traumatic brain injury and may slow down the rate of age-related cognitive decline. (ROSHI Anthology 2014). Practitioners who use the ROSHI type of Neurofeedback include MDs (psychiatrists and neurologists), PhD psychologists, and clinicians with a Master’s degree in counseling psychology who specialize in EEG biofeedback. In addition to its clinical applications, the ROSHI is also used to enhance benefits of meditation by permitting the users to deepen their capacity to achieve a clear, relaxed state of mind.

The ROSHI system can be used standalone or in conjunction with other EEG biofeedback instruments depending on the particular client’s symptoms. The software and hardware embedded in ROSHI were developed in 1988 by Chuck Davis, a pioneer in the field of EEG biofeedback. The most recent version is called the personal ROSHI (pROSHI) system.

The personal ROSHI or Neurodynamic ActivatorTM employs both light and electromagnetic stimulation over the full spectrum of brain frequencies (i.e. between 0 and 40 Hz). The concept entails provoking the brain into brief alternating states of entrainment and dis-entrainment until the brain achieves a steady-state response.

The ROSHI has been used to enhance performance in elite athletes including Olympic athletes, ice skaters, swimmers, professional baseball players, martial artists, and other competitive athletes. The ROSHI is also used by individuals interested in deepening their meditation practice.

The ROSHI instrument and accompanying software are currently being marketed as a “meditation and relaxation device.” Medical device approval is being pursued.

The ROSHI introduces complex information into the brain in the form of rapidly changing chaotic light patterns until the user achieves his or her optimal “state” of dynamic synchronous coordination and normalization between different brain regions, resulting in enhanced psychological functioning and symptom amelioration. Brain electrical activity corresponding to this optimal “state” may vary between different users reflecting disparate patterns of dynamic brain activity underlying a particular medical or mental health condition being treated. This process called “frequency following” takes place when the eyes “see” a flashing light at a particular frequency (e.g. 10 Hz or 10 cycles per second) and electrical brainwave activity subsequently “follows” or “entrains” to that frequency. The ROSHI dis-entrains, as well as entrains brainwaves. The ROSHI may enhance overall psychological functioning and ameliorate symptoms by first de-entraining certain frequencies that manifest as a mental health problem, such as ADHD or anxiety, and subsequently re-entrain rhythms that permit the brain to function in a more optimal way.

In contrast to other EEG training protocols which require active engagement by the user, the ROSHI process trains the brain to achieve a state of increased dynamic “whole” brain inter-hemispheric communication in the absence of effort on the part of the user. In other words, training with the ROSHI does not entail biofeedback per se. The essential concept underlying the ROSHI training process is that when the brain is forced to analyze an infinitely novel and unique signal introduced as light via LED glasses, the brain will learn how to run its own error-correcting routine and will subsequently undergo a process of dynamic reorganization (i.e. in response to the information in the LED signal), until it reaches a new, more optimal state of dynamic activity corresponding to greater inter-hemispheric coherence. With ongoing training, there is a consolidation of inter-hemispheric coherence and a new “optimal” state of dynamic brain activity manifesting as the alleviation of target symptoms.

Davis conceptualized ROSHI as a device and technology that helps to “synchronize” different brain regions such as the hippocampus and amygdala, enhancing inter-hemispheric coherence between complex networks of the brain resulting in improved mental clarity and cognitive functioning. Davis believed the beneficial “unifying” effects of ROSHI on brain coherence were analogous to enhanced mental clarity and self-awareness achieved by adept Buddhist meditation practitioners through repetition of a mantra, hence the name ROSHI. Perhaps the ultimate goal of the ROSHI is to train the user to quiet the mind in the same way that a meditation master learns how to quiet his or her mind through skillful practice.

Certified ROSHI practitioners have reported that the use of select protocols result in rapid gains in cognitive clarity that can be sustained with consistent training. Sustained changes in neural connectivity following ROSHI training have been confirmed by quantitative electroencephalographic mapping (QEEG) (Ibric, Hudspeth & Dragomirescu 2009). Research findings suggest that beneficial changes in dynamic brain activity achieved with the ROSHI system take place over time, as homeodynamic re-normalization of brain activity occurs in each unique user in response to patterned energy and information delivered to the brain.

Innovations in technology aimed at optimizing and personalizing biofeedback

In the mid-1990s, an important innovation that was a direct offshoot of the ROSHI was hemoencephalography (HEG), a form of EEG biofeedback that permits the user to increase blood flow to brain regions that may not be oxygenating at optimal levels, based on findings of a SPECT scan. The HEG is increasingly used as a clinical tool to enhance psychological functioning and treat mental health problems.

Recent innovations in the ROSHI system have included advances in hardware, such as LED light adjustment controls, the option to combine electromagnetic stimulation during a training session, and an expansion in compatible software, including Bioexplorerâ and BioEraâ, that permit greater user control. These innovations are aimed at optimizing the biofeedback experience to each user’s unique symptoms and preferences, permitting more individualized treatment that may help improve personal outcomes. Presently, the pROSHI has become pocket-sized in a device called the ROSHIWave. The ROSHIWave incorporates all the algorithms of the initial personal ROSHI plus a variety of combinations of the original protocols developed by Chuck Davis.